There’s something about books set in a foreign culture that just enthralls me. It’s a chance to live in someone else’s shoes and experience through their eyes what a location halfway around the world (that I’d never otherwise see) is really like. When First Second Books announced they were publishing the first of Malaysian comics giant Lat’s Kampung Boy books, my attention was suitably grabbed.

Here was a chance to travel not only to a different country, but with the story set in the 1950s it would be a different time as well. But once one gets past the initial thrill of a different culture, the question still remains—is the book actually any good?

Mat was born in a kampung, or village, within the Kinta Valley of Malaysia. Growing up in a good Muslim household, Mat learned how to make sheets of latex from the rubber trees, regularly ate fried bananas and kueh bengkang cakes, and went to school. As Mat grows up, though, would he find his new friends and the allure of fishing and stealing from the tin dredge in the river more important than the chance to go off to boarding school?

It’s interesting, because it wasn’t until I was almost finished reading Kampung Boy that it suddenly hit me that there’s not a strict, driving “plot” to be found in the book. Normally when one encounters a book that exists solely as memoir it’s obvious from the very beginning, but there’s something about Kampung Boy and Lat’s autobiographical stories (with his name altered only slightly for the main character) that makes you temporarily forget that you’re reading a book.

Lat’s stories set you at ease, told in a conversational style that simultaneously explains what it’s like to live in a kampung as well as pulls you into Lat’s confidence as if you’re the first person he’s ever revealed this to. Maybe that’s part of why it’s so enthralling, because he’s telling you very personal stories that clearly matter to him. If you stop and look at them on a clinical level, it’s a fair point to ask yourself, “Why would I care about a young boy going to school and stealing a boat to go fishing?” With Lat’s skills as a writer (and to be fair, the translator as well) it doesn’t really matter because you just want to know more; he’s got that undeniable talent that is able to hook readers. 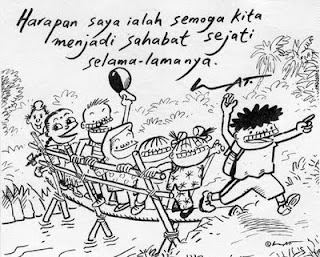 It’s once you recognize this about Lat’s writing that it also adds in an extra piece to the puzzle for Lat’s success as a creator. Kampung Boy outside of Malaysia has an extra hook for the reader in that you learn what it’s like to live in a rural part of a far-away country. Learning about how to illegally pan for tin from the dredge’s refuse, or the weddings where the bride doesn’t have to be present is something very different and intriguing for non-native audiences.

We’re getting to see something that’s not even close to our own lives, even as so many of the basic value systems and familiar bonds that we’ve grown up are still present as a gateway towards our understanding of this society. It’s similar yet different all wrapped up into one, and that’s the hook to pull the reader past those initial pages until Lat’s excellent storytelling has captured yet another victim. For people in Malaysia, though, it’s not anything even remotely strange or different. It’s simply part of their society, extremely ordinary. The fact that Kampung Boy was a huge success in Malaysia as well, then, speaks volumes to the strength of Lat as a creator. 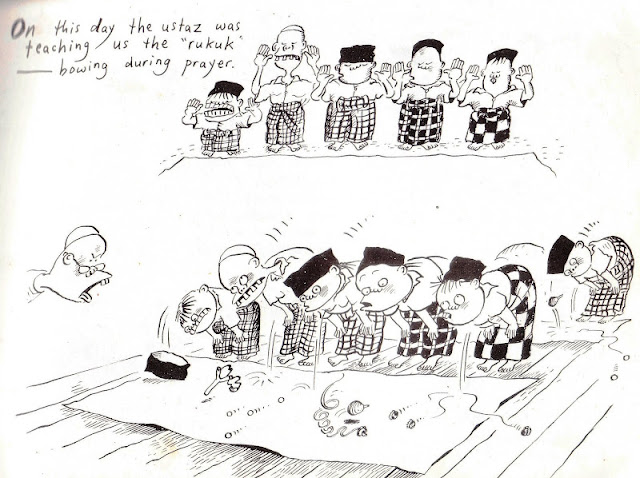 Kampung Boy isn’t told in a strict panels-and-word-balloons format. Each page is a single drawing, with narration written out alongside the art. Don’t confuse that for a lack of sequential art, though. Lat thought through the format of Kampung Boy very carefully, using facing pages to often carry the narrative across the two-page spread. It’s a smart technique, allowing him to both use his full-page drawings to have each one be its own isolated moment in time, or to have them flow together and carry motion across the pages.

Lat’s drawing style in general is attractive, a strange mix of caricature and careful, fine detail. His creation of life in the kampung brings it to life by letting you really see and feel what it all looks like, even as it’s populated by people with exaggerated grins and eyes as they mug towards the audience with their expressions. It’s a good combination, bringing the glee and joy of childhood in the kampung even as you get an understanding for its social and physical setting.


one of the video